I know....I haven't forgotten about my blog...its just that my computer is sorta broken and I sorta am kinda busy....and well, I'll spare the excuses. I just basically like Facebook more....but I'll try and blog here in a bit...if it works that is.
Posted by The Webbs at 12:06 PM 1 comment: 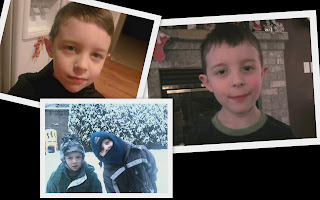 My big, big, boy.....my, almost 6-year-old. He's been counting down the "sleeps" till his birthday. He is truly, one amazing boy. He loves to draw (and he's very good), play with Lego's, play video games, dress up into different characters, play in the back yard in the snow, and to cuddle his momma and daddy. He is so creative and he loves to play. He is so great about playing independently, whereas Judah needs interaction every few minutes...unless he's watching one of his shows of course. The top left picture is Ethen posing as Bruce Wayne. Right now his favorite is Batman.

Ethen is doing really well in school, at least according to me. Every day, the kids either receive a red dot or a green dot and he has only received a few red dots for his behavior, mostly talking to his little friends. His new favorite friend in class is a girl named Elsie. She is a little cutie, and a very nice girl. He has a couple of boys that he enjoys too but Elsie takes the cake. I ask Ethen every day what he'd like for snack and he tells me, "Not cheese, Mom. Elsie's allergic to cheese." And most every day, I reassure him I already know that and I still need to know what he does want. He is a very thoughtful boy. He is quite predictable and if left to his own, I think he'd do the same things, eat the same things, and play the same things at the same times every day. He loves his routine and he loves just being home. We talk about going to the mall, Chuck E. Cheese, the park....he just likes home better. And I love him for it. He is good for me. All my kids are good for me. They keep me honest, they keep me consistent, and they keep me guessing too. I am a better momma because of my Ethen-boy. He makes me very proud! 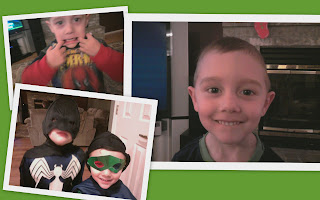 Here's my Jude-Jude. He is the funnest person in the household. He talks non-stop and moves just the same. He loves doing exactly what his big brother does. He is very loving and compassionate. In the bottom left picture, Ethen is dressed as Batman and Judah is dressed up at Robin. Judah is just plain old silly...he loves to make us laugh. He loves starting each day with a piece of gum or candy (which happens only once in a while), but he still asks most every day anyway. He always brings his toys to each room he goes. He usually wants the same toys that Ethen plays with. His favorite things are usually what Ethen's favorite things are. He is a very pleasant boy. I am so proud of him. He is about to turn four. I can't believe that my little Memorial dad baby is just about to turn four. He wore out a couple pairs of jeans lately and we found a steal at the mall for $8 jeans, and man are they cute. They are skinny jeans. Ethen doesn't have the body for skinny jeans but my almost-four-year-old-boy does...the little cutie! I enjoy having 2 boys and seeing just how different they are. 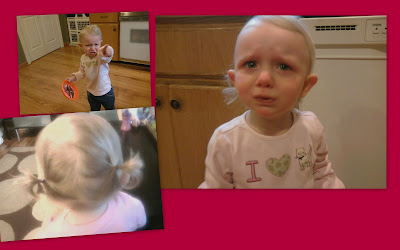 I guess I should explain the pictures before I give the update...the top left is Grace's response to me after I told her no more blueberries. The right picture is her telling me 'no' when I asked her if I could take a picture of my pretty girl (just after the blueberry issue). The bottom left is a victorious moment in the Webb home...Grace finally has enough hair to put up in wispy pig-tails. And, I am so very proud!

So here she is...my little girl. She is growing up so quickly. Not too much longer and she'll be two. She is so fun and her personality is so girly...I guess I say that cause my boys are so...boy. She is really into animals right now and especially into Baby Einstein. She makes several animal noises and my favorite may be the horse whinny, or the grunting/barking bah of the sheep. Her duck noise is pretty cute too though.
Grace is also an avid book reader. It doesn't matter the book, but she certainly lights up more for the ones with animals. She brings us her book along with her blanket and she'll push her way into our laps. She is quite touchy. The boys are certainly touchy, but I think it's because Chris is so affectionate with them. He's such a good daddy!
Grace likes her clothes, she likes stuffed animals, and especially Winnie the Pooh. She sings the theme song (in her own babbling words). I am just so in love with her and the boys. I am so glad that we have a girl. We are going to have a lot of fun times, both in the near future and far.
Posted by The Webbs at 9:36 PM 1 comment: 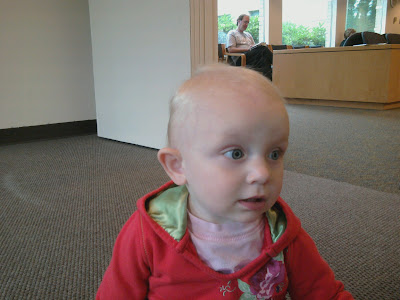 Friday Grace started walking. She has taken a few steps here and there for the last coule of weeks, but when she realized that she wasn't holding on to anything, she'd sit down. She still scoots on her booty sometimes, but she realizes that walking and even sometimes crawling gets her there faster.

She is so cute and so fun right now. I feel like I just keep saying the same thing, but it's just so true! Even Chris says that he's in love with his little girl. Her personality and behavior is so different than the boys. Already she seems very smart and to understand what we are saying. Chris or I can look at her and tell her no and she understands as well as sticks out her pouty lip and she'll obey. She obeys quite quickly. Our boys were a little more stubborn and slower to obey. She is so wonderful and I love all the time I get to spend with her. It's ok if you're jealous. She is pretty amazing!
Posted by The Webbs at 10:26 PM 1 comment: 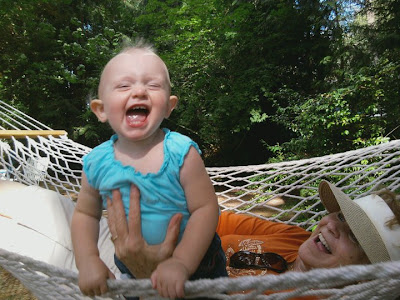 Isn't she a cutie?! I am so in love with her. She is growing quickly. Still not walking, but this girl sure gets around...upstairs, downstairs, over toys, over boys, she has no trouble. She does crawl quite a bit and also walks along furniture easily, but she lacks the stability to walk confidently. Sometimes she'll take a couple steps on her own and then realize there's no table near so she'll sit down and scoot usually. She has so much personality and beauty to her; not to mention drive and persistance. I love having a girl and she is a great compliment to our already beautiful family. Oh, and she really loves books. One thing that continually surprises us about her is that she is so much more patient. I've decided...she's a keeper!!
Posted by The Webbs at 11:18 PM 1 comment:

My Little Boy is Growing Up...

Ethen attended his first day of Kindergarten on Tuesday. He was a little aprehensive to let us leave, but day 2 was much better...almost routine. He is so amazing and we are so proud of him. Hard to believe that he is already a school aged kid! My baby... 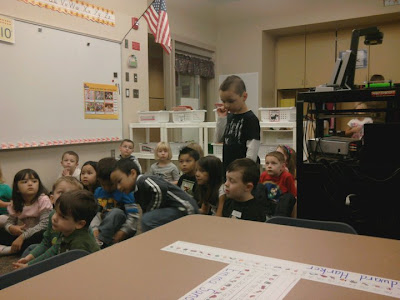 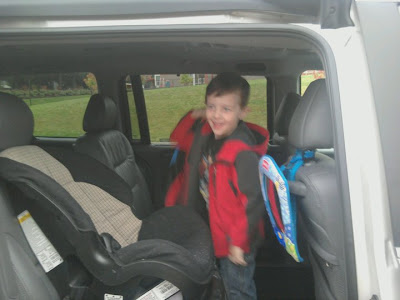 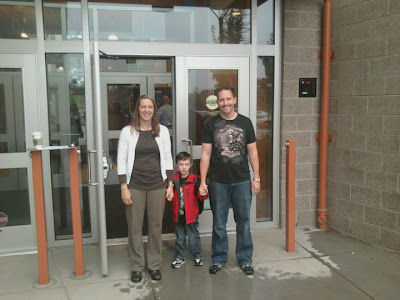 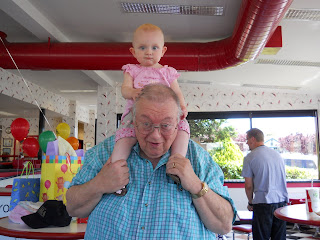 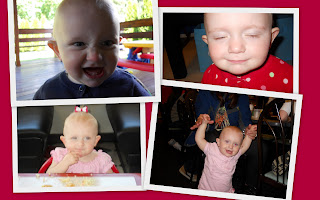 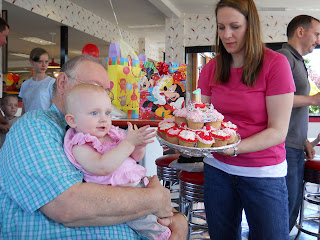 Grace turned 1 yesterday and we celebrated at Burgerville today with our friends and family. I made this "cup-cake" for her. It was a fun time and Grace got some really cute dresses! I can't believe that she's already one. She is such a cutie!!

GRACE:
So, my girly now has 5 teeth! Three on the bottom and 2 on the top, but not the two front teeth, the two outside the front two. She is getting the front 2 right now and of course, she is fevering and drooling. It's pretty cute though. She is still not even tempting to roll over (OK, maybe a couple times in the last month or so), nor is she crawling or anything like that. She still sits up and scoots to get places. Of course, when she's in her walker, she's a brute force. In our house, transitioning from the hard wood to the carpet and from the inside to the back deck, there are some bumps, but this girl is so cute ... she just lifts up her walker and marches right over any speed bumps that may get in her way. She is a pretty driven and outspoken girl. Sometimes when I take a toy from her, she really lets me know. She will definitely hold her own against her brothers though.
JUDAH:
He turned 3 last Tuesday. He is such a big boy already. He uses big words like dangerous, consequence, and disgusting. He is such a conversationalist. And very social too. He plays shy but once you are in, you're in. He loves playing with and copying his big brother and also playing by himself. He is super cuddly and loveable. I love that he wants to include us on what he does, but his constant play-by-play and sometimes non-stop monologue is overwhelming. At times, we put him in a "verbal time-out". He is so mature for his age. I know, it's probably a biased opinion. But, hey, it's my blog.
ETHEN:
We are so very proud of Ethen. He is so amazing and smart and loveable and cute and cuddly and innovative and thoughtful .. ok, I'll stop. I do have share some cute things though to back up all those flattering compliments. Ethen loves to draw. I can blog some pics in the near future, but for now, it's just words. He draws mostly Superheroes, but also a few other things. He likes to draw things and cut them out too. He has recently started playing Chris's X-Box 360 and he is good. Good thing is I am still better than him, but I know it won't take long for him to pass me by. Technology and young people make an amazing pair. He also plays his V-Smile that our neighbor gave us and he's pretty darn good at that too. Ethen also has a great imagination. He can play with his action figure toys what seems like hours on end just entertaining himself, even if we invite him to do something different with us. His new favorite cereal is Frosted Shredded Mini-Wheats, and his new favorite lunch is a PB&J w/ honey, no crust. He'll have a bowl of Honey-Nut Cheerios anytime though, it's the ol' stand-by.
GARRISON:
No, I don't have a new baby. But, yes, we do have another son. Just for the summer though. Our dearest of friends have gone to Alaska for the summer and we have the privelege of caring for their 15 yr-old son till they return. (He's also my god-son.) Our boys absolutely love him. Grace just stares at him like he's a new attraction. He is such a good "big brother" to them and says, "Wow, that's amazing" whenever they show him something (even if it's the 5th time). He plays piano, (most) guitars and drums all very well. He loves watching TV, playing video games and instruments, working out and being with his family. He is a good boy and we hope that we will bless him while he is here.
And, here's a recent family pic of us as we entered my aunts outdoor wedding. I love my family so much! 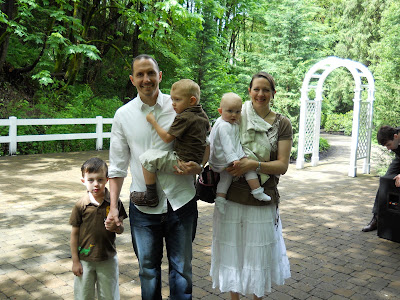 The Webbs
Married in August '02, had our first son, Ethen, in April '05, and our second son, Judah, in May '07 and our daughter, Gracie, in June '09! Just living a Christian life the best we know how. 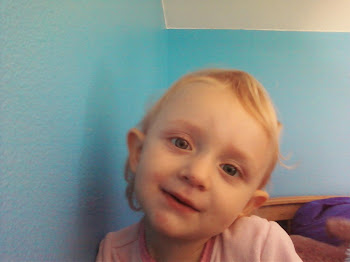 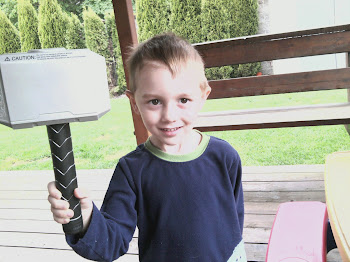 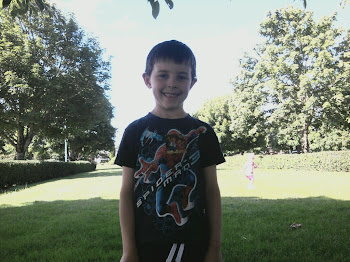 Fav things to do is draw and play Lego's

Loves to play by himself, but plays well w/ Jude too